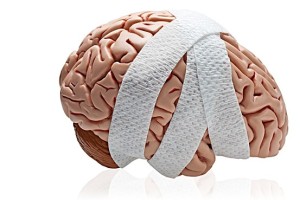 Until about  a year ago, I never really worried about my kids getting injured in sports.  Both my children have played ball since the could walk–soccer, flag football, basketball and baseball.  There were plenty of bruises and scrapes, but for the most part nothing serious.  I know that injuries are part of the deal (that’s why I made my son play flag football and not tackle.)  If injuries weren’t reality then we wouldn’t have to sign a zillion papers promising not to sue the YMCA or rec league.  That being said, I still naively thought that broken arms and sprained ankles happened to other people’s kids…and there I go, clicking my heels.

Today, I’m a little neurotic when it comes to sports injuries.  My hypersensitivity comes from my own son’s concussion last January.  My ten-year old went up to intercept a long pass at midcourt, lost his footing and landed on the back of his head.  (He would want me to mention that he DID catch the basketball!)  I will never forget how the whole gym went silent as a group of coaches and my husband ran onto the court.  My son managed to walk off on his own and sat dazed and confused on the bench as a family friend and teacher went to get ice.  At the time none of us could have imagined the scary door this injury would open up for him and our family.

He had a headache and he was grumpy (who wouldn’t be?  It was Saturday night and he had plans to go to a hockey game with a friend.)  What we didn’t realize was that this headache would last four months.  We didn’t go to the emergency room…a rookie mistake.  We did however consult a friend (a paramedic ) who recommended that we see our family doctor first thing on Monday.  The doctor’s examination was thorough and included a trip to the local hospital for x-rays, etc.  It’s amazing the things you learn about your own kids in a doctor’s office setting, you know–things they tell the doctor and not their parents.  Like the fact that when he first hit the floor everything went black for a second.  And that he couldn’t hear out of one ear for most of the weekend.  And finally that his jaw hurt on one side when he chewed (turns out he was chewing on the other side so we wouldn’t know.)  The doctor filled us in on all the results and told us that the scans had all come back clear.  We were relieved.  Now we just had to limit our son’s screen time (TV and computer), make sure he got plenty of rest, and WAIT.  Oh yeah, he couldn’t play any sports until he was headache free for 5 days straight.

I wish I could say that healing was as easy as following the doctor’s instructions.  About three days later we felt comfortable sending him back to school.  In hindsight, that was another rookie mistake.  It’s very hard to limit screen time (and READING) when you’re not present, even if all the teachers understand the situation.    I think that’s where the lesson of this particular injury really comes full circle.  Most of us (myself included) have no idea how serious a concussion is.  We see and hear about athletes all the time who take hard hits and end up  back on the field or the court the next week.  What we don’t realize is that a concussion is a brain injury and we only have one brain.  And brains take time to heal!  Especially children’s brains.  Allowing your child to return to regular activities too soon can lead to a secondary injury.  These can be very serious and cause permanent damage to the brain and even death.  You can check out Dr. Sanjay Gupta’s video for more details about concussions in children.  http://www.youtube.com/watch?v=XnIRso_04Ks&feature=player_detailpage

It took four solid months for the headaches to go away.  My son couldn’t participate in gym, recess or any other physical activity.  This is especially deflating to a competitive ten-year old boy who eats, drinks and breathes sports.  About three months in, our doctor recommended we scale back all stimuli and pull him out of school at lunch time.  This is where we really started to see improvement.  Less means more when it comes to healing a concussion!  The Monday after Easter, almost four months to the day of his injury, my son was released for regular activity.  It’s a day I will never forget. 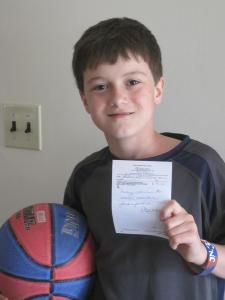 Sean with a note from the doctor clearing him for all activities following a concussion. It was a long four months.

So, here’s what I now know about concussions:

1.  Concussions are emergencies.  Have someone look at the injury right away.

2.  Reduce all stimuli for the first week, no exceptions.  This means…no TV, cell phones, computers or electronic devices of any kind.  No reading or school.  No physical activity.  I truly believe that if we had cut out all stimuli during the first week of his injury he would have recovered much faster.  Children will kick and scream, but we must be the parents in this situation.

3.  Remind your children that they must be honest in medical situations and tell you every symptom they’re experiencing.  If I had known that my son blacked out (even momentarily) or that he couldn’t hear out of one ear, we would have certainly responded more urgently and taken him to an ER right away.

4.  Don’t be afraid to make the tough decisions and stand firm.  My son wanted to play basketball again.  We allowed him to go to the games and support his team, but he was DONE for the season.  I will tell you honestly that there was a lot of talk among friends, family and schoolmates about how we were being overprotective parents, questions of my son’s “toughness,” and many who second-guessed the seriousness of concussions in kids.

5.  Find a doctor who understands concussions in children.  We were fortunate.  I cannot tell you how much we value our kid’s doctor!

6.  Pray and ask for prayers.  As a family of faith, we believe that a mighty God was with our son and our family during this time.  The power of prayer cannot be underestimated.  The strength and support offered by our church family was vital.  I could go on and on….

Today, my son is playing basketball again.  Don’t get me wrong–we all held our breath during that first basketball game back and especially during the game that took place in the same gym where he landed on his head.  I am a more fretful mom today and I make no apologies for it.  I cringe and pay extra special attention when I hear about similar injuries.  And I make it a point to tell other parents and family members What I Now Know about concussions.

What I Now Know (W.I.N.K.) is a recurring entry on this blog.  The idea of WINK as an acronym popped into my head the other day while I was doing laundry.  You see, aside from being a slave to housework I actually have quite a bit of knowledge filed away in my overworked brain.  While I don’t claim to be an expert on anything, I know something about a few subjects that just might be worth sharing.  And just like that this new blog idea was born–WINK (What I Now Know).  I hope to share a little bit of what I’ve learned as a daughter, sister, friend, wife, mother and all-around regular, ordinary girl.  Look for ongoing posts, but What I Now Know (as a busy wife and mother) is not to promise weekly entries because life happens– and it usually happens when I want to blog!  (Here’s where if I could wink at you, I WOULD.)