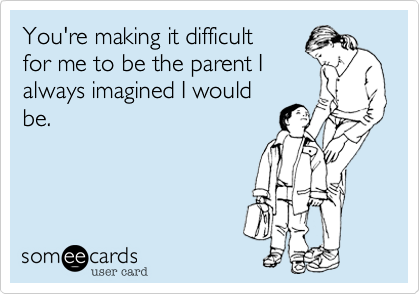 “The first 40 years of parenthood are always the hardest” – Unknown

I guess it’s fair to say that we’ve hit the “rocky stage.”  It’s the craggy valley where your kids try your patience, serve up dozens of complaints, defy you at every turn, accuse you of the most outlandish things (like purposefully ruining their lives!) and all before Cheerios.  I believe the marketing industry categorizes this phase of adolescence as “tween,” but that sounds a little too benign for this particular stage of development.  And while I’m not sure how we got here, (as far as I can tell) there are no posted signs for the nearest exit.  The most baffling part (at least for me) is that just when I think things can’t get any crazier and I start wondering who these children REALLY belong to, I find myself the recipient of a hug and a warm smile. 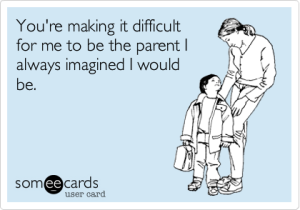 So what’s up?  It’s the same old story.  Only it seems all the more confusing since I’m the Mom actually living through it.  I feel like the victim of some kind of psychological warfare, thus making it hard to balance what I know is age appropriate behavior with these outrageous episodes.  I know enough to realize that I wasn’t the perfect child.  Yet, I still seem to think that on so many levels I had to be a little easier than my two kiddos.  “Can I have this?  Can you get me that?  If I do this, then will you…” (fill in the blank with some outlandish request), followed by, “Do I have to?” and “You CAN’T make me!” It’s like we stepped back in time and I’m the mother of toddlers again.  Suddenly, the automatic kid response to everything is “No” accompanied with eye rolling (that’s new) and foot stomping.  I shudder to think of what might happen if the two actually got along long enough to conspire against my husband and I.  My sweet, darling daughter often takes her cues from her older brother which only seems to compound the problem.  And whoever said that boys were easier than girls doesn’t know squat about my household.  So what’s a Mom to do?

Basically, I pray a lot.  I try to understand where they’re coming from and channel my own tween years.  I take a deep breath and sometimes I actually have to ESCAPE to my happy place.  I remind myself that parenting is not easy.    In fact, it’s pretty much a thankless job.  And I think that’s the part that bothers me the most.  That’s the part that hurts so much.  The lack of gratitude.  These children have EVERYTHING.  I’m not just talking about material things, these children absolutely have the whole, wide world laid out before them!  My brain knows that their lack of gratitude isn’t something I should take personally, but still my heartstrings can’t help but feel heavy and pulled and sometimes even FRAYED at the end of the day.  It’s tiresome, worrying and basically not much fun.

On bad days…well, it’s bad.  Good days (as in 24 continuous hours of bliss) are hard to come by.  That’s why I’m trying to hang on (and find hope in) the little things.  I’ve secretly started calling these rare occurrences “Mom-tastic Moments.”  They’re the small victories that I tuck into my heart and hold on to for dear life.  They stack up like this…. 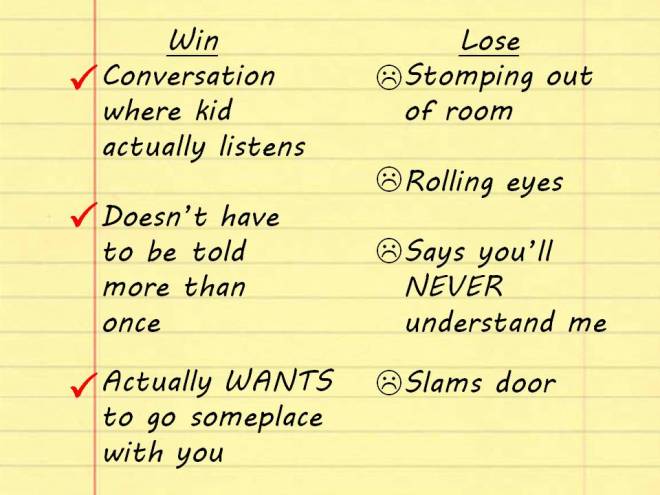 Like with anything, the good times are unpredictable and unscheduled.  The outrageous moments seem to happen at the most inconvenient times.  And since this parenting thing doesn’t come naturally to me, I have to call upon my own life experiences to get by…and sometimes that makes for a parent-child disconnect.  For example, I remember how much my husband laughed when he overheard me telling our newborn, “If this breastfeeding thing is going to work out, you’re going to have to learn to FOCUS.”  Needless to say, my baby didn’t choose to listen to me (even at two days old) and we had to move on to bottle feeding.  Short-term loss, long-term gain (the kid had to eat right?)  And many years later, my rational approach to life still gets trumped by these two irrational beings.  I’ve read all the books, researched and googled every problem, and (in desperation) I’ve even tried to reason with them!  Most of which has gotten me nowhere.  So while I’m still neck deep in this motherhood thing, here’s What I Now Know (WINK) about parenting:

I am far from the perfect parent.  There are still days when I’m as far away from the win column as any one person can get.  I lose my cool more often that I like.  But, like most of us, I’m in it for the long haul–these kids have my whole heart 🙂  For some crazy reason, (as irrational as it sounds) I wouldn’t trade it for the world.  And when my children are 40…well, maybe (just maybe) I’ll get that win column tally mark I’ve been waiting for….  Hope you get yours, too!

😉 What I Now Know (W.I.N.K.) is a recurring entry on this blog.  The idea of WINK as an acronym popped into my head the other day while I was doing laundry.  You see, aside from being a slave to housework I actually have quite a bit of knowledge filed away in my overworked brain.  While I don’t claim to be an expert on anything, I know something about a few subjects that just might be worth sharing.  And just like that this new blog idea was born–WINK (What I Now Know).  I hope to share a little bit of what I’ve learned as a daughter, sister, friend, wife, mother and all-around regular, ordinary girl.  Look for ongoing posts, but What I Now Know (as a busy wife and mother) is not to promise weekly entries because life happens– and it usually happens when I want to blog!  (Here’s where if I could wink at you, I WOULD.)