Summer is a state of mind.  –author unknown 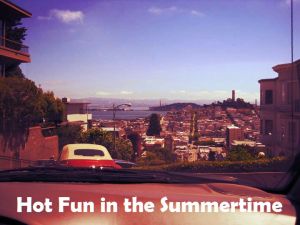 College radio.  It’s not for the faint of heart!  Ok, I’m not trying to be dramatic but the eclectic nature of college radio makes it barely palatable for a large chunk of the “listening” population.  That being said, I still find myself tuning in occasionally for the sheer randomness that it offers.  I “worked” at my college radio station…sure it was in the news department, but the news is flanked by programming and a lot of that programming is music after all.  This opened the door to a wide variety of music genres and styles and for whatever reason (at least for me) it opened the door to a gem of a group called Sly and the Family Stone.

By the time I “discovered” them, a greatest hits CD existed…and boy did I love it!  Optimistic, upbeat, socially progressive, soulful, it quickly became one of my favorites and “Hot Fun in the Summertime” stood out above the rest.  I’m not sure what I like better…the way the song builds, the creative use of strings or the horns (probably the horns.)  The song just oozes good times.  I found it interesting to learn that this tune actually came out in August of 1969…at the end of summer.  Sly and the Family Stone performed it as part of their set at Woodstock helping to propel them to stardom and push the song to the No. 2 spot on Billboard Hot 100.  The song is also listed on Rolling Stone’s Top 500 of all time and is considered by many to be a “summer anthem.”

Jamming out to this song reminds me of summertime in good, ol’ Lawrence, Kansas…cruising up the hill in my little red car blasting the CD (I’m sure my music choice turned a few heads!)  I was tickled to learn years later that the group hailed from the San Francisco area…my absolute favorite city for summertime fun!  I still enjoy their greatest hits collection today and if you listen closely you just might see me blasting their music again…this time in my red swagger wagon!  Not as cool, but just as fun.