Lately, I’ve been marveling at my daughter.  It’s not that she’s doing anything special really…it’s just that she’s growing up and I’m trying to take it all in.  I get like this sometimes with my kiddos…making an extra effort to be super present, wondering what they’re thinking and how their brains work…basically just staring at them (sometimes they catch me–that’s a teeny bit awkward!)  The funny thing is, that while she may not actually be getting any taller (she’s doomed to be short like her mother,) I can see all kinds of other changes…in her maturity, her personality, and the way she carries herself.  She’s really becoming her own person and as a consequence separating from me…at least as much as any 11-year-old should be allowed to do.  So when I came across this article titled What Your Ponytail Says About You on the Man Repeller website, it really caught my eye.

You see, Casey and I both LOVE long hair.  I would say about ninety percent of the time we both choose to wear our hair down, but we are not strangers to ponytails.  As soon as Casey’s hair was long enough, I would put it in pig tails or a nice high pony.  I loved fixing her toddler hair and adorning it with those cutesy little girl bows!  Then came Disney Channel and it wasn’t long before she boycotted wearing her hair up and started favoring long locks carefully styled with a head band (a la “Gabriella Montez.”)  No more funny “fountain” ponytails on the top of her head!

Recently, however, after years of only wearing ponytails to play sports, she has decided that the pony is in style again…only now it’s on her terms.  This is what made the ponytail article stand out.  No longer would she settle for my favorite style (the high pony,) but rather she preferred the low and parted ponytail–and she could style it all by herself, thank you very much.  The low and parted ponytail, the one the Man Repeller article labeled the “champagne” of ponytails for its elegant and timeless look.  The description basically screamed “Casey.”  It went on to say that this was the look of someone who is “making a knowing decision to look put together.”  Yes, that’s my girl. 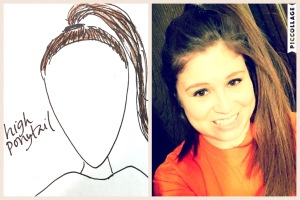 So, out of curiosity of course, I had to look up the hidden meaning to my go-to ponytail look–the HIGH pony (a look I’ve been sporting for practically my whole life!)  Turns out it’s the preferred style of those who exercise (what?) and it’s also great for “signaling that you don’t give a what!”  Apparently this is a very versatile look and its meaning depends upon the method in which it is executed (combed and smoothed, tousled and messy…that’s a lot to read in to a ponytail!)  It goes on to say that the “high ponies are the maxi dress of their kind,” suggesting that the look is only for some and definitely NOT for all!  This made me giggle.  Here I am a forty-year old wife and mother, and the high pony has always been my go to updo.  Yes, I like the “fountain” as my daughter so affectionately calls it (did I mention that she’s pretty well versed in sarcasm these days?) The high pony is my all-time favorite!

All fun aside, this was just a cute reminder that while we have so many mother-daughter similarities, my girl is certainly growing up and developing her own thoughts and ideas.  It’s causing both a swelling of pride and quite a bit of anxiety as well.  In a matter of months, we’ll be talking about locker décor and what table she landed at for lunch in the middle school cafeteria.  We’ve already had numerous conversations (or was it disagreements) about clothes and shoes…not to mention what’s in and what’s definitely OUT!  Occasionally, I get to be labeled “cool,” but mostly I “just don’t know anything.”  Still, I’m the first person she comes running to on a bad day, when she doesn’t understand something, or gets herself into a jam.    Which just goes to show that what goes around, comes around.  My own mother probably has loads of stories about my tween/teen years and the occasional ups and downs of our relationship back then.  And I know that when I talk with fellow mothers today, it seems we’re all in some kind of yo-yo territory with our own girls at one time or another…a reality of growing up.

So, I may not be fixing her ponytails anymore…and that’s okay because every girl has to learn to style her own hair.  It’s all just part of the process.  And while I learned through curling iron burns, crazy perms and tons of AquaNet…it’s fun to watch her develop her own sense of style.  (And in some ways I think she’s  got the advantage–we didn’t have YouTube tutorials back in the day!)

Hair doesn’t make the woman, but it definitely helps!  –Unknown