I’ve loved the stars too fondly to be fearful of the night.

A “cool” Mom would have packed the kiddos in the van (snacks and blankets in tow) and strategically driven into the darkest part of the night to view this summer’s Perseid Meteor Showers.  But I never said I was a “cool” Mom.  So instead, I mandated the offspring turn off their devices, shuffle out into the backyard, and plant themselves on carefully arranged patio furniture (all under threat of a grounding if they took ONE look at their tablets or phones.)  “Your eyes,” I said, “need several minutes to adjust.”  Fifteen minutes, to be exact.  It was shortly after midnight…and just two days before the first day of school. 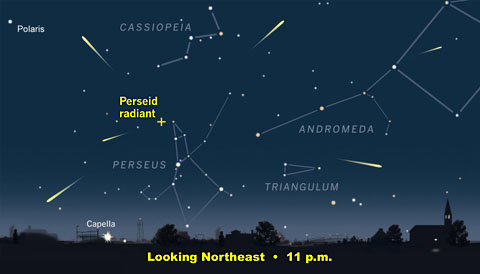 We should have already been a week into school night “practice,” but we weren’t.  So putting respectable bedtimes on hold (yet again,)  we looked to the sky.  We were on a mission to see a shooting star…or at least I was.  Prior to that summer evening, we had spent several nights staring at the heavens.  I had studied a constellation app and was armed with lots of information–some I learned as a kid, some I learned in a college course, and some other info I had just recently found on the internet.  It was still super warm outside and oh so humid!  Aside from the crickets, the only sounds at that late (early?) hour included two passing cars, our dog’s crazy panting (not sure what her deal was that night), and the occasional meow of the neighborhood cats. So on this particular night, star watching was an exercise in patience.   I’m not sure what you know about the Perseid Meteor Shower, but I heard upwards of 30 shooting stars per hour!  WOW!  That, however, did not happen.

Within the first five minutes, the complaining began.  I decided to impress the kiddos with my knowledge of constellations.  We picked out the standards…The Big Dipper and Little Dipper.  I taught them how to find the North Star.  We saw several planes fly through the night sky.  And finally, we moved on to Cassiopeia and the story of Perseus himself.  I should be happy that the children politely listened to my little lesson, but it wasn’t very long before they shifted back to their “we’re bored” posture.  Convinced they were outside for no reason at all–we finally saw a shooting star!  And what a shooting star it was…  Just when I thought all my efforts to secure one final summer memory were lost…we saw the “big one.”

It’s not like we had never seen a shooting star before.  We had.  But despite all the time we had spent stargazing this summer, the kids hadn’t had much luck.  But right then and there we had finally witnessed one…and it was spectacular!  Very dramatic, very bright, and especially long-lasting—given the fleeting nature of shooting stars.  It streaked across the night sky right above our heads!  It was a spectacle to behold and an experience we will never forget…for several reasons:

1) because all of us saw it together

2) because everyone made a wish

The last part was sort of a surprise.  We had never talked about wishing on a star and yet, it was the first thing we all instinctively did.

As we looked to the sky I couldn’t help but wonder what everyone had wished, especially the kiddos.  As a child, I can remember wishing for lots of things…everything from new shoes to a “good” hair day to getting to go someplace special.  As I got older, my star wishes moved on to passing a tough test, getting a certain boy to notice me, and making it through college.  Nowadays, my wishes are typically for others…and especially for my kids.  But I wouldn’t necessarily call them wishes…because they’re really more like prayers.  That night as that star streaked across the sky…the wish on my heart was really a silent petition, a prayer to God.

We saw two more meteors streak across the sky that night.  Later, after everyone else had gone back inside, my daughter asked if I thought wishes came true.  She said she was pretty sure that she had wished hard for a flat-screen TV one Christmas, but she didn’t get one.  She detailed a list of many other wishes that had gone unfulfilled.  It was the start of a long conversation about magical versus miracle, God versus “genie,” and the incredible power of prayer.  Wishes, I explained were desires of the heart, but prayers are always answered…sometimes with yes, sometimes with no, sometimes with wait and sometimes with go.  It’s a conversation that we’ve revisited several times since.  Thank you, Perseid Meteor Shower…for one last summer hurrah!  Under that night sky, when we should have been fast asleep, the heavens opened the door to something truly amazing…a blessed conversation that served in many ways as its own answered prayer.  I honestly could have stayed out all night!

I’m already looking forward to more sky watching..and especially more conversations about life, faith, and the majesty of our Great Creator.  And I hope that someday the kids will share their wishes. and especially their prayers with me—because if (when) mine come true…you know I’ll be the first one to tell.

The only difference between a wish and a prayer is that you’re at the mercy of the universe for the first, and you’ve got some help with the second.